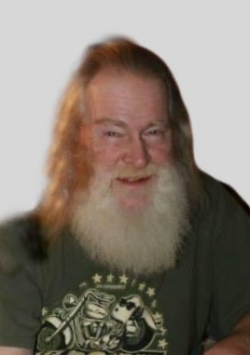 It is with heavy heart that family and loved ones said their final goodbyes to Mr. Wayne H. Getchell, who passed away peacefully Saturday, September 3rd at Saint John Regional Hospital at the age of 79 with his granddaughter Michelle Anderson at his side.

Born on Christmas Eve, 1942 to Hazen Getchell and Berla Powers (nee Cumberland), he was the second of five children. Growing up in the 50's, Wayne adopted the classic cool look popularized by James Dean, but his grandchildren always thought he looked like the "Fonz". He was passionate about motorcycles, hot rods, and muscle cars.

Growing up between Mayfield, New Brunswick and Toronto, Wayne took to both the big city and an enjoyment of the outdoors. Drawing on his experience as a Boy Scout, Wayne took pleasure from being on the water kayaking and fishing, and the bush, hunting and gaining respect for nature. A perfectionist, he was drawn to competitive shooting in Ontario and later in New Brunswick, and a career as a tool-and-dye maker. He took pride in his profession and claimed to have never made a mistake.

Eventually, the call of New Brunswick caused him to return with his wife Elinor M. Getchell (nee Jones). Wayne had two children, David and Debbie Getchell, and Elinor (Elley) had one daughter, Alice Neumann.

Wayne and Elley continued their lifelong love of motorcycles and the outdoors together, and they opened their own store in St. Stephen, Elley's Antiques, in 1980. Wayne was able to pursue his passion for sports cards and memorabilia, war antiques, and the Wild West, even instructing motorcycle classes. He and Elley could be found at yard sales throughout the province.

Wayne enjoyed telling stories, and this led him to writing for the Courier and Courier Weekend, sharing his experiences, thoughts, and personal views on a wide variety of topics from hunting to current events. He also developed a passion for music and formed a band with local residents seeking to inspire the next generation to keep Rock & Roll alive and to pursue their dreams.

Wayne may have seemed the tough guy on the outside, and there is little doubt his stubborn streak was legendary, beneath the crusty exterior was a kind and gentle soul always ready to lend a hand to others when needed.

Elley's Antiques closed in 1998 and he and Elley entered an early retirement enjoying a simple life of maintaining their home, yard work, spending time in the woods, and of course his dog Nipper, who bore an uncanny resemblance to Wayne.

He had a great deal of pride in the accomplishments of his great grandchildren, whether near or far, and he was always interested in their young lives.

A "Rock & Roller" to the end, Wayne would appreciate these words from Jim Morrison of the Doors. "Give up defining yourself; to yourself or to others. You wont die. You will come to life...don't be concerned with how others define you. When they define you, they are limiting themselves, so its their problem. Whenever you interact with people, don't be there primarily as a function or a role, but as the field of conscious Presence. You can only lose something that you have, but you cannot lose something that you are."

Wayne didn't allow others to define him, and if they tried, he'd have paid little mind. Beneath that crusty exterior, there was a gentle soul ready to join you for your journey, both the highs and the lows. Wayne's conscious Presence will be missed by his family and those whose paths he crossed, but he will never be forgotten because for those who loved him, he became part of who they are, and "you cannot lose something that you are".

In keeping with Wayne’s request, there will be no funeral service or visitation held.