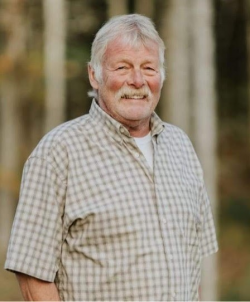 It is with broken hearts that the family of Garnet McGregor announce his passing on September 3, 2022 at Saint John Regional Hospital with his family by his side.

Garnet was born to Mac & Joan McGregor in 1956. He grew up in Milltown. Garnet had a few jobs, but his passion was being a carpenter. He owned his own business for many years. He took great pride in his work and loved to be working.

Garnet loved his family and grandchildren dearly. He will be missed sadly.

Garnet was predeceased by his parents and sister Lesa.

A celebration of life will be held for Garnet at his residence, 94 Route 725, Little Ridge on Saturday, September 10, 2022 starting at 2 PM.

For those who wish, donations can be made in his memory to the Liver Foundation (https://www.liver.ca/how-you-help/new-brunswick/), Kidney Foundation (https://kidney.ca/) or a charity of one’s choice.  Condolences may be sent to the family online at www.mehanfuneralhome.ca