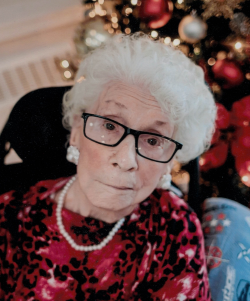 She was born and raised on Grand Manan, daughter of the late Vance and Beulah Guptill. In addition to her parents, she was predeceased by her husband of 64 years, Maj. Lloyd P. MacDonald, and her older brother Sidney Guptill.

Ethel stayed on Grand Manan until she graduated high school. She entered nursing training at Chipman Memorial Hospital and graduated as a registered nurse in 1946. It was in the hospital that she met ex­WWII RAF Special Service Squadron member Lloyd MacDonald whom she married in June 1948. When Lloyd again joined the RCAF, Ethel's nursing career of some 45 years took her from Marville, France (1959 -1963) and through five Canadian provinces. She and Lloyd returned to St. Stephen, New Brunswick in 1973. From this time, she worked at Charlotte County Hospital, Lincourt Manor (evening charge nurse) and local Doctor's offices. Her reduced hearing due to childhood measles, led Ethel to avoid jobs where her compromised hearing might lead to an unfavourable nursing outcome.

Ethel's interests included painting, sewing, quilting, curling, square dancing, coin collecting, singing, playing the piano, tending to her flower gardens, and loving her many, many, many special dogs and anything purple.

A graveside service will be held at the St Stephen Rural Cemetery, St Stephen, NB in the spring.

A special thanks to the staff at Lincourt Manor for their excellent care for the last seven years.

For those who wish, donations can be made to the Kirk McColl Memorial Fund or to a charity of one's choice. Condolences may be sent to the family online at www.mehanfuneralhome.ca