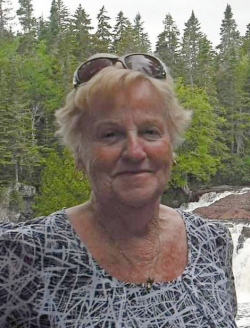 After a long battle, Ann M. Perrin finally gained her wings on Thursday, December 30, 2021, with family by her side.

Ann Left home at the age of 15 and moved to St Andrews, NB to work at the Algonquin Hotel. After a few years she moved back to McAdam, where she met Clayton, he was working in McAdam for NB Power at the time, and they were married a year later in November of 1954.

They moved to St Stephen and a year later their first child was born, Patrick. He passed before her in October 2017, her heart was broken when he passed. Two years after Pat’s birth they welcomed another son, Clinton (Kathy) and six years later their third child was born, a daughter, Carole Carrier (Mike).

Ann made many friends throughout her life. She loved wintering in Florida with Clayton and their friends in Winter Garden. She had a few special friends; Doreen Sheehan, Lorna Haley and Sandra Wamboldt. Ann was a very kind person and made friends easily, too many to mention.

She had a special relationship with "her girls" as she called them; Ellen LeBlanc, Diane Allaby, Brenda Hennessy, Mary Shea, Pam DeLay, Angie Hennessy and Jeannie Bland.

Ann was a member of the Royal Canadian Legion Branch # 9 Ladies Auxiliary for 51 years, the Catholic Women’s League and a member of IODE. Her faith was very strong, and she always said her Rosary every night.

She will be greatly missed by all her family and friends, but especially by her husband of 67 years, Clayton.

Due to Covid restrictions, a private family Funeral Mass will be celebrated with Father Suresh Savariraj officiating. Those who wish to view the funeral service may do so with the following link on Monday, January 3, 2022 at 2 PM. https://youtu.be/nc268q-olRI

A graveside service and Celebration of her life will take place in the Spring, when we are able to gather.

For those who wish, donations to the Charlotte County Cancer Society or a charity of one’s choice would be appreciated. Condolences may be sent to the family online at www.mehanfuneralhome.ca

The family would like to thank Dr. Reinman, Extra Mural, Palliative Care at C.C.H., especially the nurses for their care and compassion.