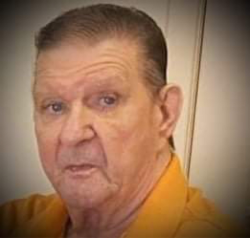 It is with great sadness we announce the passing of our brother Manford E. Cogswell at Wauklehegan Manor, McAdam, NB on December 22, 2021.

Born in 1939, Manford was the son of the late George and Edna (Scott) Cogswell.

Growing up in St. Croix Manford developed a love of fishing at a young age. He also loved country music and enjoyed singing and playing guitar with his brothers. Manford found a lot of enjoyment over the years playing cards and cribbage with family and friends. During his stay at the manor, he looked forward to his weekly visits from his sister Evelyn who brought along his favourite treat, her homemade banana bread.

He is survived by his sisters Evelyn (Edward) of McAdam, NB and Catherine Croker (Gary) of Tillsonburg, Ontario, several nieces and nephews.

In addition to his parents, Manford was predeceased by his partner Victoria (Vicky) Jones whom he loved dearly, and siblings George, Merlin, Roger, Tony, Shirley, Gloria, Joyce.

As per Manford’s request, there will be no service. A private family burial will be held at a later date.

The family would like to extend a sincere thank you to the doctor and staff at Wauklehegan Manor. A special thank you to his great-niece Kelly for all of your love and care. Manford developed a special bond with one of his caregivers and she became like family. Thank you, Anna DeMerchant, for your kindness and friendship.