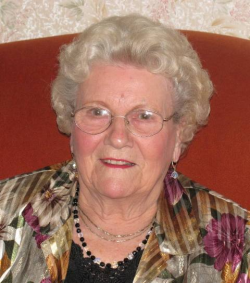 It is with broken hearts that we announce the passing of our dear Mother, Nellie D. Grimmer, on Friday, November 19, 2021

Born in Grays, England, she was the daughter of the late John and Violet (Littlewood) Clayden.

Her adventures began at the beginning of WWII when she was only thirteen. Due to the raging war, schools were closed, and she was off to work at the Bata shoe factory where they made boots for the troops. She and her friends did not let a little thing like war and work deter them from sneaking into dances in the evening, where she would meet a handsome Canadian soldier that would later become her husband. Running home from these dances during air raids, they would run from one shelter to another giggling like the young girls they were.

After marrying in 1944, she sailed to Canada as a War Bride. She arrived in Canada the day before her 19th birthday. Fortunately for her, her mother-in-law was also a War Bride, from WWI, and understood the struggles that she would endure. Her love returned from war in September, and they began their lives together, raising three children in St. Stephen. Her love of dancing never ended, and she could be found at the Legion any "Dance night" where she and Ken would dance the night away.

Throughout the many years she enjoyed camping with friends, travelling, playing darts and cribbage and many social clubs including the Junior Ladies Auxiliary, The Women's Institute, The Dancing Grandmas, Creaky joints exercise group, and the Over 45’s dart team. She was a diehard Legion supporter and enjoyed every event that she could there, including kitchen parties and many late nights singing with the "Carry on Crew". Some of her hobbies included knitting, sewing, and gardening.

She had an infectious laugh and a smile that would light up a room! She will be missed by many!

In addition to her parents, Nellie was predeceased by her husband Kenneth, son Kenneth, and sister Violet.

Please be advised, that due to mandatory regulations imposed by the New Brunswick government, everyone 12 years of age and older must show proof of vaccination or medical exemption certificate and government-issued ID to attend the funeral service and/or visitation. Face masks must be worn at all times while in the funeral home.

For those who wish, donations can be made in Nellie's name to the Heart and Stroke Foundation or a charity of one’s choice. Condolences may be sent to the family online at www.mehanfuneralhome.ca

"And in the end, it's not the years in your life that count,

it's the life in your years"