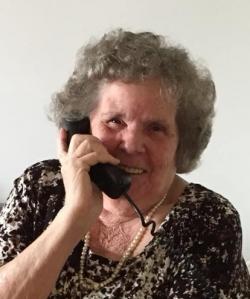 Marjorie (McGrattan) (Craig) Saxton, age 88, of Halifax passed away on December 27, 2020 at Northwood Home Care Centre with family at her side.

Marjorie was born July 11, 1932, daughter of the late Henry and Phyllis McGrattan of St. George, New Brunswick. She taught school for a number of years and later owned a grocery store for several years. She retired from the Nova Scotia Hospital where she worked in later life. Marjorie’s greatest joy was her family.

Funeral service will be held at The S.O. Mehan & Son Funeral Home Ltd., 23 Main Street, St Stephen, NB. on Wednesday, July 7, 2021 at 2 PM. The family will receive friends at the funeral home at a time of visitation on Wednesday from 1-2 PM.

The link for the live stream is https://youtu.be/R1SWrHt4JWE

Donations in memory of Marjorie may be made to the Alzheimer Society of New Brunswick or a charity of one’s choice. Condolences may be sent to the family online at www.mehanfuneralhome.ca