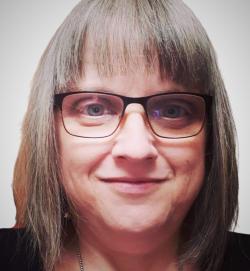 On June 26, 2021, Michelle J. Bartlett left this world to go on to her next journey.   Born on November 14, 1967, she was only 53 years old when, after many years of fighting heart disease, her heart stopped beating and she died at the Saint John Regional Hospital, Saint John, NB.

She was predeceased by parents Marvin and Moira (Cook) Bartlett and brother Edward.  She is survived and missed by sister Beth Stinson, brother-in-law Eddie, brother Mel Bartlett, sister-in-law Maureen and brother Tim Bartlett.  Michelle took great joy in spoiling her various nieces and nephews plus her well-loved dogs, Shelly and Molly.  She was a dedicated knitter, enjoyed baking and (according to her nieces and nephews) had a real knack for picking out truly awful action movies to watch with them.

Michelle graduated from Sir James Dunn Academy in St. Andrews and then attended NBCC.  She worked in Halifax before returning to St. Andrews to continue her career.  Michelle was a member of the Women’s Institute where she held the office of First Vice President.

In 2004 Michelle had surgery to repair a heart valve and two days later suffered a stroke which caused a severe anoxic brain injury.  Despite the medical prognosis of a complete loss of mental function and being sent to palliative care, Michelle miraculously rallied. She underwent intensive rehabilitation, speech, occupational and physical therapy to learn to speak, swallow and walk again.  After months of hard work, Michelle was able to regain her ability to live an independent life.

Despite the challenges she faced after her brain injury, Michelle worked tirelessly to promote the support of brain injury survivors in NB, including volunteering as a community advocate for the Brain Injury Association of Canada. In recognition of her efforts, Brain Injury Canada gave her an Award of Merit in 2016 and she received the Debbie and Trevor Greene Award of Courage in 2018.  She could easily have sat and felt sorry for herself but, instead of that, she used what had happened to her to help others (and enjoyed every second of it).

If you’d like to make a charitable donation in Michelle’s memory, the Brain Injury Association of Canada (braininjurycanada.ca) was near and dear to her heart.  Condolences may be sent to the family online at www.mehanfuneralhome.ca