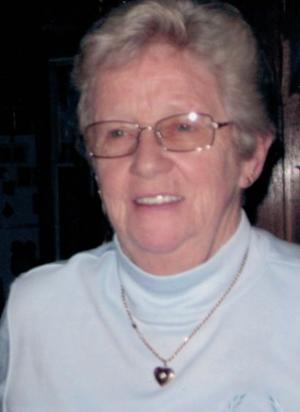 The family of Carole Lee Pollock are saddened to announce her passing at Wauklehegan Manor, McAdam, NB on Saturday June 5, 2021

Carole spent the early part of her life in McAdam, working as an RNA in both Harvey and McAdam hospitals. Then in 1971, she and her three sons became travellers with the US Airforce, when she married Murray Pollock. California, Germany, Arizona, and New York were her homes until retirement. Then back to McAdam. Even when living far away, her heart was always in NB.

Her cottage on Harvey Lake was her happy place-enjoying sunsets, canoeing and wildlife. Her passion was reading, and Elvis followed by watching NASCAR, football, and tennis. While still in good health, she took a stab at snowmobiling and wheeling, with Carroll Knowlton. (TWOOFUS)

Her sons were here pride and joy-from being three blond headed imps to the three over six-foot men that they are today. No matter how far the distance apart, they were so close in her heart, and her in theirs, they talked every week and visited when possible! Such love!!!  That love was equally shared by her "little" sister.

Carole is survived by her sister Sheila Moffitt (Pam); sons Michael (Janet), Brian (Michael), Chris (Cindy); five grandchildren; two nieces (who thought she was the "greatest Aunt in the world! "); two great nieces; several Moffitt and Edgecombe cousins and SO many good friends.

In addition to her parents, she was predeceased by her husband, Murray Pollock, and her common law husband, Carroll Knowlton.

Our family would like to express heartfelt thanks to the staff and residents of Wauklehegan Manor, who became her extended family and cared for her with love and respect to the end!

By Carole's request, there will be no visitation or funeral. A private family service will take place at a later date.

For those who wish, donations can be made in Carole's name to the Wauklehegan Manor, Polymyositis Association ( https://www.myositis.org/donate/) or a charity of one’s choice. Condolences may be sent to the family online at www.mehanfuneralhome.ca.

“And in the end, it’s not the years in your life that count, it’s the life in your years.”
Requested Charity
Wauklehegan Manor, Myositis Association or a charity of one's choice