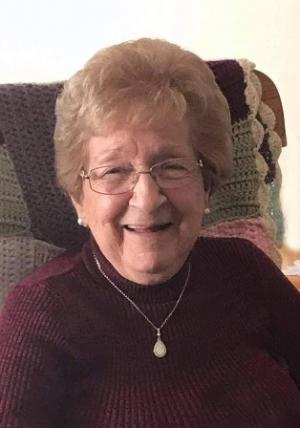 It is with saddened hearts that we announce the death of Madeline J. Blakley of St. Stephen, NB, wife of the late Herbert E. Blakley, on Wednesday, May 19th, 2021 at the Charlotte County Hospital surrounded by her loving family.

Madeline was born in Honeydale NB, daughter of the late George and Mina McDougall of Lawrence, NB.

Mom was loved by all who had the pleasure of meeting her. She had a "down to earth" personality that would draw people to her. She loved to knit, especially socks and dishcloths so you knew what you would be getting for Christmas. Anybody that has ever ate at Carmans Diner, has had the privilege of meeting and talking with mom, no matter how far away you went, you could probably run into someone that had an encounter with mom. She worked there 30+ years off and on. She really enjoyed the people she worked with and they still came to visit with her to this very day. She was a people person, a real social butterfly. She loved playing cards, bingo on Monday nights, watching Wheel of Fortune and her Soap everyday. She really enjoyed gathering with her friends in the "puzzle room" in her retirement building and she could play a mean game of washers for someone that "didn't have very good eyesight". She was one heck of a cook and you never went home hungry. You couldn’t visit at Mom’s without her being bound and determined to either give you something to eat or send something home with you.

There is so much more that we could say about mom, but we know this, we are sure going to miss her.

In addition to her parents, she was predeceased by her husband, son, Edward Blakley, daughter, Gail Blakley, brother, Junior McDougall and sister, Helena Quinn.

A private family funeral service will be held; however, the family will receive friends at The S.O. Mehan & Son Funeral Home Ltd., 23 Main Street, St Stephen, NB on Saturday, May 22, 2021 from 2- 3 PM

For those who wish, donations in memory of Madeline may be made to the Charlotte County Cancer Society or a charity of one’s choice. Condolences may be sent to the family online at www.mehanfuneralhome.ca