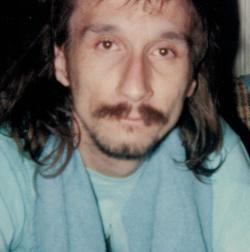 Kenneth "Kenny" Lee Taylor, amazing artist, professional bottler, expert green thumb, old time rock and roll lover, not so good singer, just a side of tipsy and a man that would give the shirt off his back.

He was born on Grand Manan, February 25, 1964 to his parents Gloria and Art Taylor. He did not grow up rich thus teaching him the worth of many things and to help others as much as possible even when had did not have much himself. Kenny grew up loving and caring about anyone in his life, especially his son Scott Somers and his grandson Zachary. He was in their lives constantly and when they weren’t around, he would boast about them and how much he loved them.

Kenny was a scrawny man but a hell of a hard worker; whether bottling, picking tips or periwinkles, doing yard work and working on a multitude of different projects. He was great at speaking his mind; he would tell you how it is, how he felt about things and would make sure you knew if he wasn’t happy with you. The best part about Kenny was he was always joking and even in the saddest of times knew how to make his family laugh. He swore, drank and smoked like a sailor, however had no sea legs and did not often go on boats.  He walked often and biked even more. His bike was well known around town, as he would often be seen venturing around on it.

Kenny is survived by his large crazy family: his siblings Charles Flagg, Susan Taylor (John), Martin (Pam) Taylor, Peggy-Sue Taylor, Allan Greene, Carla Greene and Kelly Taylor (Shane); his nieces and nephews Jennifer, Jason, Adam, Casey, Evan, Jessica, Nathanial (Paige), Mashayla (Jacob), Cheyanne, Sara, and Dylan; His son Scott Somers (Hayley), Carla (Todd); his grandson Zachary; as well as aunts, uncles, cousins and great nieces and nephews. Growing up he had the opportunity to be close with his siblings and build a bond that would last until he passed. Being a child in a large family didn’t stop him from being okay with having more siblings as from a young age he adopted Lee Hartford as his best friend and brother from another mother.

He loved everyone no matter how annoying they got or how much drama they brought before him.

Kenny was predeceased by his father and his mother whom he loved and missed dearly. He often talked about tormenting his mom, playing cards with her, and her baking skills. He was predeceased as well by his Aunt Wilma, and much too soon nephew William.

Plans for his funeral have not yet been made, as he would complain, "Covid-19 really gets in the way". However, the family will receive friends at The S.O. Mehan & Son Funeral Home Ltd., 23 Main Street, St Stephen, NB. on Monday, April 5, 2021 from 2-4 PM. If you’re unable to attend the visitation, where there are no funeral plans for now, please celebrate his life with a cold beer and some ACDC, Metallica, or some Ozzy.