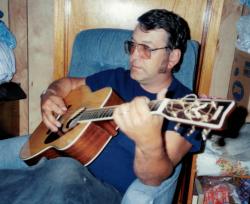 Randall E. Hamilton of St. Stephen, NB., passed away suddenly at the Saint john Regional Hospital, Saint John, NB on Thursday, December 24, 2020 at the age of 66.

For those who wish, donations in memory of Randy may be made to the Heart & Stroke Foundation, Diabetes Association, or a charity of one’s choice.

Randy loved entertaining people and playing his guitar. He will be missed by many friends and family near and far.