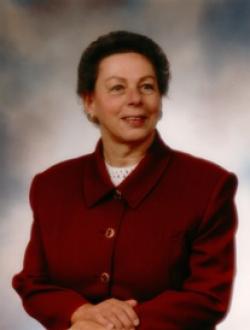 We are sad to announce the passing of Ruby Jean Anning at the Passamaquoddy Lodge on Thursday, November 26, 2020, after a long battle with Alzheimer's Disease. She was born to Robert and Mona Stewart of Campbellton, New Brunswick on November 21, 1933. Ruby was predeceased by her husband Robert Anning, her parents, sister Doris and brother Irby. She is survived by her brother Elwin, and her nieces and nephews. She will be greatly missed by her chosen family Elda and John Bailey, Shelley Hooper (Robert), Morgan Bailey (Christopher Burt), Sophie, Samuel and Justin and her dear friend Marion Brien.

After earning her Teaching Certificate at Acadia University, Ruby married Robert Anning and moved to St. Andrews, NB. She taught elementary and high school levels in the St. Andrews area for over 30 years. During her tenure at Sir James Dunn Academy, she taught English and many of her students say they remember and use the many lessons she taught them. Ruby coached basketball of which she was very proud, and she also supervised the library and taught students the Dewy Decimal System. Ruby helped students in so many ways, at times opening her home to them and treating them as her own.

Ruby's summers were spent at her cottage on Chamcook Lake where, for years, she enjoyed entertaining and cooking. She attained her Education Degree by attending summer courses at Acadia University. Many winters found her curling with the Business Girls of Heather Curling Club.

She made many lists and little notes, and they can still be found intermingled with all the memories we have collected over the years. Ruby's love of cats was shown by her large collection throughout her home. She was a wonderful knitter and honoured us with her gifts of sweaters, mitts, and socks. She made spectacular quilts and again gifted them to many.

As requested, there will be a graveside service for family and friends at a date to be determined. In her memory, we suggest the Multiple Sclerosis Society, Charlotte County Cancer, NB Alzheimer's Society, or a donation of your choice.

We appreciate all the kindness and compassion everyone at Passamaquoddy Lodge showed to Ruby in her final years. We would also like to thank the staff at McLay's Oak Bay Haven for the wonderful care given to her while she was a resident there.