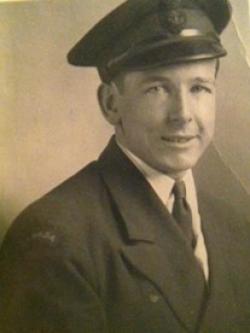 It is with sadness that we announce the passing of Philip Joseph Ross beloved Father and Gump (Grandfather), on November 19th, 2020, surrounded by loved ones.

Phil was born in 1923 in Milltown, NB to Herbert and Agnes (Smith) Ross. Carrying on the family tradition, at a young age he enlisted in the Royal Canadian Navy and was a proud Veteran of World War II.  From 1941-1945 he served on board the Destroyer H.M.C.S. Assiniboine and the Minesweeper H.M.C.S. Winnipeg, which took him across Canada, Newfoundland, high seas in the Atlantic Zone and North West Europe.  He was awarded the 1939-1945 Star, North Atlantic Star and Clasp Volunteer Medal and Service Clasp War Medal.  He would remain a proud sailor for the rest of his days, and his family took great joy in joining Phil at Navy reunions and on an annual pilgrimage to the Nova Scotia International Tattoo in Halifax each year (a tradition they plan to continue).

Upon returning from the war, Phil would continue his life of service, dedicating 39 years to the Town of Milltown and St. Stephen.  In this time he would act as police officer, and firefighter until his retirement.  His daughter and granddaughters have fond memories of visiting him in the fire hall and of all of the wonderful coworkers he had during that time.

Philip cared deeply for his family and never missed a dance recital, drama production or graduation ceremony.  He loved to spend time in the kitchen and along with his partner and wife Amelia (nee Robichaud) taught his granddaughters the joys of digging in the garden and making homemade preserves.  He also loved to tinker and fix things and it was a rarity that he couldn’t find a way to build or mend something.  With that skill he built the family a cottage at Digdeguash Lake, where they will continue to gather and cherish his memory.

For many years Philip acted as patient caregiver to his beloved wife Amelia.  He loved to laugh and was able to help his family through difficult times with his humour and wit.

Up until his final days, Phil was up for any adventure that came his way, and his presence will be deeply missed by family and friends.

Due to the ongoing Covid-19 pandemic, a celebration of Philip’s life will be held a later date