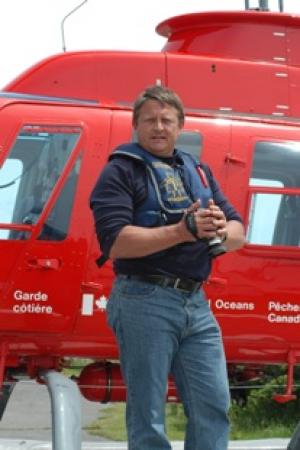 It is with great sadness to announce the passing of Arthur David MacIntyre on November 8, 2020, at age 62.

Art was born in Belleville, Ontario, to parents Geraldine and late Robert MacIntyre. He is remembered lovingly by his sister and her husband, Larissa and Richard Bailey, and late brother Rob MacIntyre. Uncle to Elenna, Jared, Cara, Ian, Colin and Bobby, and great-uncle to Everley. He is survived by his two daughters, who miss him dearly, Shelby and Leah MacIntyre. He will be sadly missed by partner Elan and her daughter Lison Chandler.

Art moved to St. Andrews shortly after graduating from the University of Guelph in 1981. His love of the ocean directed him to the small seaside town where he worked as a marine biologist until his passing. His life revolved around the ocean, and he was happiest at sea.

He was a man of many talents: he was an avid scuba-diver, underwater videographer, bagpiper, and wood crafter. He loved sports: he played rugby, football, and lacrosse in his younger days and played hockey well into his 50’s. Art was a lifelong learner and teacher, especially if the subject matter pertained to the biological sciences.

Art was involved with the community in many ways. He was a member of the local theatre group that would perform comedy plays every other year. He always asked to be cast in very particular roles: the more ridiculous, outrageous, and embarrassing, the better. He would bagpipe for town events, including Canada Day parades, Christmas tree lighting ceremonies, and Remembrance Days, truly any reason to put the kilt on. Those who knew him knew that December was a very magical time of year for him.

Here is to you, Art. You will be so missed by everyone who has ever been fortunate enough to get to know you. Your generosity and kindness will continue to radiate through this town for years to come. He would often recite a famous Scottish saying: "Lang may yer lum reek" which translates to "Long may your chimney smoke". While his chimney smoke went out far sooner than we would have liked, his fire will remain in our hearts.

Due to public health restrictions, services will be postponed to the summer of 2021. Those who wish to make donations in Art’s memory may do so on his behalf to the Great Fundy Coastal Cleanup Project through the Nature Trust of New Brunswick.