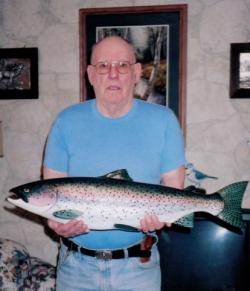 It is with sadness the family of Edgar G. Garrett announce his passing at the Oromocto Public Hospital, Oromocto, NB. on Friday, June 12, 2020.

Born in Somerset, England, son of the late George Henry and Winifred May Garrett.

Edgar worked in a furniture factory in Somerset from the ages of 14 to 17. Eventually he joined the British Military, with the Welsh Guards.

Edgar, with his family, immigrated to Canada in July of 1948. Once arriving he worked at Christie Woodworking in Saint John as well as working in the woods in Hoyt with Ross Kirkpatrick.

In 1953, he joined the Canadian Military, where he served for over 24 years.

Edgar will be remembered by friends and loved ones, as a gifted musician, artist, and wood carver.

In addition to his parents, he was predeceased by his sister Joan.

A graveside service will be held at the Rockland Cemetery, McAdam, NB on Monday, June 15, 2020 at 2 PM. McAdam Legion Branch #7 will hold a Tribute to A Veteran Service immediately following the graveside service.

For those who wish, donations in Edgar’s memory may be made to a charity of one’s choice. Condolences may be sent to the family online at www.mehanfuneralhome.ca