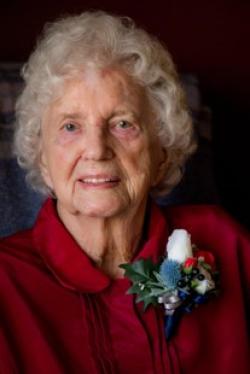 It is with deep sorrow that the family of Dorothy Hyslop (nee Currie) announce her peaceful passing on April 25, 2020 in the Charlotte County Hospital.

Dorothy was born in Dumbarton Scotland. Like many schoolchildren in those days, she was assigned a Canadian "pen pal" - one Betty Hyslop of St. Stephen, NB.  As fate would have it, Betty's brother was a Canadian soldier, Robert S. Hyslop based in England during World War II prior to the invasion of Europe. He travelled to Scotland on leave to meet his sister's pen pal and that meeting went very well, as they were married in Dumbarton on July 10th of 1945.

Dorothy travelled to Canada as a "War Bride" on the RMS Aquitania in 1946. She made her home and spent the rest of her life in Charlotte County. She and her husband Robert had six children whom they raised in the town of St. Stephen and the village of Moores Mills. Dorothy was a very community minded person and was a former Chair of the District 23 School Board.

She became involved in municipal politics and was elected to St. Stephen Town Council for several terms. Her community work was a labour of love for her and she was a member of several boards and committees. She was a long-time member of the IODE and a supporter of the Presbyterian Church in St. Stephen.

Dorothy was predeceased by her parents Buchanan and Alison (Mair) Currie, her husband, Robert Samuel Hyslop (2004), her brother Buchanan Currie, and her son Peter Douglas Hyslop (Barbara). Left to mourn are her sons Robert Hyslop (Marie) of Moncton, Ronald Hyslop (Marlene) of Ottawa, Jeffrey Hyslop (Dale) of Calgary, David Hyslop ( Elizabeth) of St. Stephen (with whom she resided), her daughter Kristy Johnson (Scott) of Burlington and her youngest brother Hugh Currie (Gloria) of Bathurst and Halifax. Given her venerable age she also leaves numerous grandchildren and great grandchildren, nieces and nephews throughout North America and Europe.

Her spirit of adventure, demonstrated at an early age by starting a new life in a faraway land, never left her. She was always keen to see more of the world and to read, learn, and experiment with new things. For her, the arrival of the home computer was a godsend. Even into her nineties she was using email and Facebook to keep connected with friends and family all over the world.

A special thank you from the family goes out to the staff at the Charlotte County Hospital for their dedication, professionalism and compassion.

As per Dorothy's wishes, cremation has taken place. A celebration of her life will be held at The S.O. Mehan & Son Funeral Home Ltd., 23 Main Street, St Stephen, NB. on Wednesday, May 12, 2021 at 2 PM. The family will receive friends at the funeral home  from 1 PM until service time.

The link for the livestream is https://youtu.be/A0K8wV_PH84