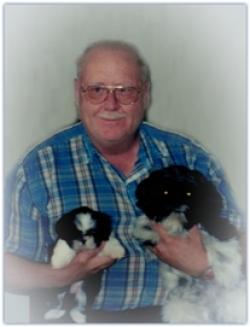 Murray J. Pomeroy died peacefully at the Charlotte County Hospital, St Stephen, NB. on Sunday, June 14, 2020, after a lifetime of , as Dad would say, when someone asked him, …" what’s your health problems ?, his response would be ‘you name it and I got it…’". Dad always had a sense of humour right up to and including the end. He was the toughest, kindest, fairest, and most compassionate person I knew.

Murray retired from the Charlotte County Hospital as the maintenance and boiler room supervisor, he, along with his team, literally were the backbone of the hospital, keeping it running day and night.

He was also a volunteer firefighter with Western Charlotte Fire Department for 44 years and provided back up for the 6 o’clock page. He was instrumental, along with a few others back in the day, to get the fire department started.

Murray was also a huge supporter of the Little Ridge Community Hall, especially the once a month potluck.

Survived by his daughter, Tracy Jane Pomeroy, stepson, David R. Jacques, step grandson, David Jacques Jr and his beloved Shih Tzu, Rascal, who was with him and content by his side as he passed away .He is also survived by step- daughters and their families, all living in Maine, as well as many cousins, (who were like brothers and sisters), many nieces and nephews and several great friends.

In addition to his parents, he was predeceased by his wife, Kathy, infant brother, son, Ronald J. Pomeroy and four of his beloved Shih Tzu : Ben, Joy, Jake and Zippy, their ashes will be interred with Dad. Knowing the four of them would be with him, gave Dad much peace.

By Murray’s request, there will be no funeral service or visitation held. There will be a private burial at a later date.

For those who wish, donations in memory of Murray may be made to the Little Ridge Community Hall, Extra Mural program, Home Support, or a charity of one’s choice. Condolences may be sent to the family online at www.mehanfuneralhome.ca

A heartfelt "Thank You" for all the kindness and caring of the Extra Mural Program and Home Support Services, as well as the staff of Charlotte County Hospital and his doctors.