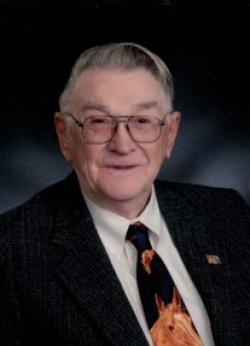 The family sadly announces the passing of G. Malcolm "Mac" Caswell, husband of Norma J. (Hastey) Caswell which occurred on May 30, 2020 at Charlotte County Hospital. He was born at Chipman Memorial Hospital in St. Stephen in 1931 to the late George Marsh Caswell and Marjorie Helen (Browne) Caswell.

Mac attended school in Milltown and later graduated from St. Croix Commercial College, St. Stephen.  He had a varied work career beginning in the Bank of Montreal, then the office of the bulk station of Irving Oil, then to the Unemployment office for 14 yrs. Next, he became part owner of what is now the Winsome Inn and worked there until he became an International Harvester Farm Equipment dealer. Upon the sale of that business he became a Provincial Tax Assessor until retirement in November of 1995.

Mac grew up in the Milltown United Church, singing in the church choir as a young lad and later becoming the choir director of the senior choir.  For many years he was part of the bass section of senior choirs, in the Presbyterian Church and the Kirk McColl United Church. He also was a lay preacher at the United Methodist Church.

Music was a big part of his life and he enjoyed all types –from church music to bluegrass.  He was a gifted soloist sharing his voice in many churches and community events.  He played most stringed instruments and enjoyed many gatherings at his home with friends and family providing the entertainment.

Mac was a charter member of an international Barbershop group and travelled to competitions all along the eastern coast of North America.

Mac was a 63-year Mason and the most senior Past Master of Victoria Lodge #26 F & AM and a former member of Queen Mary #4 Order of the Eastern Star.

In addition to his parents, he was predeceased by his only brother Bob.

Due to the current Covid 19 pandemic there will be no visitation or service at this time. A memorial service will be held a future date.

For those who wish, donations in Mac’s memory may be made to the Kirk McColl United Church or the Charlotte County Cancer Society. Condolences may be sent to the family online at www.mehanfuneralhome.ca