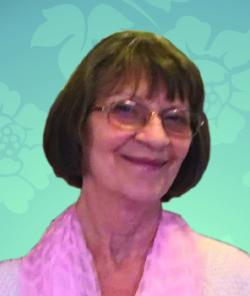 It is with completely shattered hearts that the family of Velma Frances Hossack nee Armstrong (June 5, 1944 – March 15, 2020) announce the passing of their beloved mother who was taken from them far too soon. Sadly, the immensity of their love was not enough to conquer the evils of cancer.  The void that is left behind is indescribable and the amount of tears shed, unfathomable.

Velma leaves behind her 4 adoring children: Sherri (Kenny), Ronald, Neil and Susie (Dale).  She also has one beloved granddaughter Jessica (Dylan).  Jessica dubbed her grandmother Mammy as soon as she learned to talk and it was a nickname that stuck.  Friends and family from far and wide would address her as such forevermore.

Velma was the loving sister of Lloyd (Woodstock, Ontario) and Doug (Janet) (Larder Lake, Ontario).  She was predeceased by: Father, John Henry Armstrong; Mother, Ethel Phylis (Hall).  Sisters: Irene, Margaret and Jeannette.  Brothers, Bud and Carl.  She will be missed by several nieces, nephews and of course, her extended Carman’s family.

Velma was always particularly pleased when her Ontario dwelling family members would vacation in New Brunswick during summer months so she could spend some time reconnecting with her kinfolk.  She so enjoyed the field trips that they would take, visiting important Armstrong landmarks or taking in some East Coast sights.

If you knew Velma on a personal level you would know that she was quite a deep-thinking individual, a lover of nature and all animals both domestic and wild.  It would be nothing unusual to arrive at her home and witness birds of all varieties resting on her many birdhouses, trees and fences.  She enjoyed secretly feeding the deer, wild turkey, squirrels and any other furry and feathered visitor that came her way.  To spend time with Velma was to hear her constant admiration of all things of nature, the texture of a plant, the colors of a field in autumn or the billowing of the clouds in the sky.  A few years ago, she had a lovely new fence erected on the Carman’s property and refused to have a particular tree cut down that was in the way.  Instead, she went to the extra expense and had the fencing built around that tree!  An act that speaks volumes of her mindset towards all living things.

The Armstrong family had a humble upbringing on the Ledge Road and Velma took on various menial jobs at an early age.  This no doubt instilled in her that work ethic that she carried with her throughout her entire life.  Velma’s greatest achievement (aside from being described by her children as being World’s Greatest Mom) was her contribution to the community as sole proprietor of Carman’s Diner for over 40 years.  She ran that Diner with a hands-on approach.  If you’d spent much time there at all, there is no doubt that you would have seen her participating in almost all aspects of the restaurant.  She would waitress, wash dishes, clean, bus tables, greet customers, all the while tending to the financial aspects after hours.  She conducted business conservatively and tried to abide by lessons taken from her father-in-law and original owner, Carman Hossack.  She refused to be swayed from its initial authentic Diner formula.  Velma wanted to provide real food to hungry people and to offer a comfortable atmosphere that anyone could feel at home in.

In closing, the family would like to quote some special comments that they have recently received from friends and clientele that they have taken comfort in:

- "She was a role model of quiet strength"

- "She was the embodiment of an empowered woman"

-"A true pioneer of female entrepreneurs"

-"She built an institution in St. Stephen and it will live on as her legacy"

-"A strong thread in the tapestry of our community"

-"Velma was a strong and kind woman.  A force for what is good and what is right"

-"She appears to do it all with ease, she never appears rattled, just calmly taking care of business"

-"What a journey.  What a huge accomplishment"

-"the love, respect and admiration that her children, staff and everyone have for her is such a testament to what an amazing woman she is.  A shining example to celebrate.  A true inspiration to all women"

Velma’s family would like to thank so many people who have helped them during this horrific struggle.  To name a few:  each and every member of the Carman’s family, Crystal and Mark Walsh, Sandy Thomas, Kathleen Richards, nurse Jaclyn, Doug and Janet Armstrong, Marlene Farrell.  Thanks for so many cards, which Velma admired daily.  Thank you for the flowers, food, care packages, gifts and for pitching in at Carman’s.  We hope to return the kindness some day.

Please note that due to the recent health precautions, there will be limited seating for this service and we would encourage you to forward your messages of condolences online to www.mehanfuneralhome.ca

The family invites anyone that wishes to join them to Carman’s Diner directly following the funeral for a light luncheon.