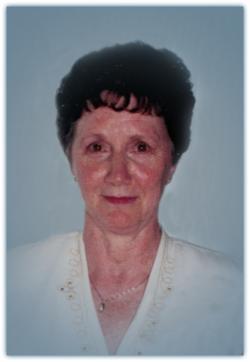 The family of Marie E. Reagon is saddened to announce her passing at Wauklehegan Manor, McAdam, NB. on Sunday, December 22, 2019.

Born in St. Stephen, NB., she was the daughter of the late Donald and Geneva Pomeroy.

After her daughters were raised, Marie filled her time with travel and by volunteering for charitable organizations including Meals on Wheels, the Red Cross and the Cancer Society.  She freely shared her cooking and baking talents and often opened her home for meals or a slice of apple pie.

Faith was a huge part of Marie’s life and she devoted countless hours to the Rockland Drive United Baptist Church. In 2012, her many contributions to her community were recognized when she was awarded the Diamond Jubilee Medal.

In addition to her parents, Marie was predeceased by her first husband, John Sinclair and sister, Phyllis Murphy, as well as brothers Donald and Kenneth Pomeroy.

A celebration of Marie’s life will be held at the Rockland Drive United Baptist Church on Friday, December 27, 2019 at 3 PM.

For those who wish, donations in Marie’s memory may be made to the Alzheimer’s Society of New Brunswick or to the Rockland Drive United Baptist Church.