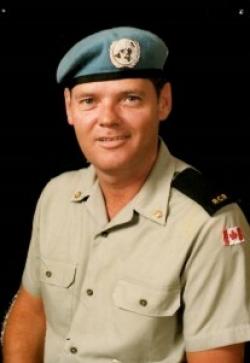 It is with great sadness that the family of James McMorran of Lincoln, NB announce his sudden passing on November 9th, 2019 at the Dr. Everett Chalmers Hospital in Fredericton. Jim was born in St. Stephen, NB on January 24, 1943.

Jim was predeceased by his parents J. Blaney and Mabel (Morrison) McMorran, one sister & four brothers.

Jim had a long career with the Canadian Armed Forces. He was proud to be a soldier and was honored to serve his country. Over the course of his 27-year career, Jim served with the Canadian Guards and later the Royal Canadian Regiment including two UN peacekeeping tours in Cyprus. He was a member of the Royal Canadian Legion Petawawa Branch #517 and Oromocto Branch #93. Following his military retirement, he worked for UNB Fredericton campus security. Jim was a 50-year member of the Masonic Lodge. In his leisure time he had a passion for golf and could be found in the early daylight hours on the fairways. Jim was also an accomplished dart player and travelled across the country to compete.

Jim’s family would like to thank those who cared for him in recent years, his caregiver Sheila Bishop and the staff of the Veteran’s Health Unit, Fredericton.

Family will receive comfort at The S.O. Mehan & Son Funeral Home Ltd., 23 Main Street, St. Stephen, NB. on Thursday, November 14, 2019 from 1 PM until service time on Thursday. A celebration of Jim’s life will be held following the visitation at 2:30 PM. Interment will be at the Scotch Ridge United Church Cemetery following the service.

In Jim’s memory and in lieu of flowers, the family suggests donations to your local SPCA or to the charity of one’s choice. Condolences may be sent to the family online at www.mehanfuneralhome.ca