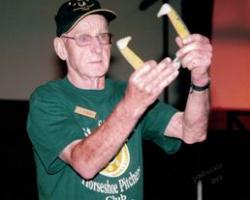 Earle M. Fraser died peacefully at his home in his own bed cared for by his family on Wednesday, September 11, 2019.

Born in Oak Hill, NB., son of the late Thomas B. and Mildred V. Fraser.

Earle was a hard working man spending most of his life making a living in the woods. He married his love Bernice in 1964 and they started their life together in Old Ridge. The barn soon  filled up with cattle and they began their farm. He worked the woods from September until spring. He spent the spring and summer planting a huge garden and harvesting hay for the cattle. He would harvest the oats before he returned to the woods so he had straw for bedding for his animals.

He always enjoyed playing horseshoes no matter where he was, but he always wanted his own pits. What started out with one pit grew to 8, and with the help of the local horseshoe club became known as Fraser Farm with regular tournaments, weekly practices, and even hosted the provincials in 2017 and 2018.  He had the honour of pitching the ceremonial first shoes at the 2015 Canadian championships. He also had the honour of being named the oldest active player in Canada at the age of 92.  He also has an award named after him awarded annually to the most dedicated and sportsmanlike member of the club. He enjoyed the camaraderie of his fellow pitchers even after he was unable to pitch himself.

He was a strong family man and took his greatest pride in his children and grandchildren. Anytime they arrived at the house he would appear from what he was doing to have a talk and see what they were up to.

He was loved and respected by many, would help anyone who needed it but could not stand laziness.  He had a great sense of humour, enjoyed friends stopping in for a coffee and one of Bernice’s homemade cookies or doughnuts.  He loved too eat, and eat on time. There will be a coffee break in heaven at 9:30 and 2:30 everyday.

In addition to his parents, he was predeceased by one son, Brent Earle, one daughter, Esther Ruth, three brothers: Donald, Charles and John, one sister, Katherine.

For those who wish, donations in Earle’s memory may be made to New Life Christian Assembly or a charity of one’s choice. Condolences may be sent to the family online at www.mehanfuneralhome.ca