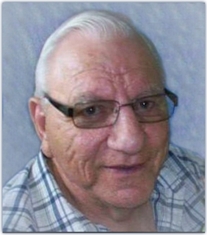 Jarvis Oswald Wilson passed away with his family by his side at the Charlotte County Hospital, St. Stephen, NB. on Wednesday, June 26, 2019.

Born in Honeydale, NB., son of the late Marguerite (Hubbard) and Edward Wilson. Jarvis had many jobs over his 80 years: truck driver, mechanic, carpenter, Pastor, policeman and woods worker, but his greatest loves were God and his family. His wife and kids were his priority, even until the very last day. He had a big spot in his heart for all his grandchildren, as well as his beautiful great-grandchildren. His love for God, music and guitar will live on for many years through his family.

For those who wish, donations in memory of Jarvis may be made to the Heart and Stroke Foundation or a charity of one's choice. Condolences may be sent to the family online at www.mehanfuneralhome.ca