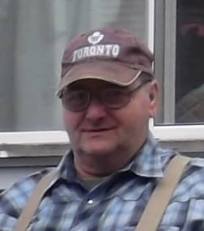 Alan was born May 30th, 1951 in St. Stephen, NB and was the son of the late Richard and Elizabeth Bradford of Oak Bay, NB.

Alan lived in Oak Bay with his loving wife Donna (Smith) Bradford and is survived by his children Richard Bradford and wife Donna Bradford of Corinth, ME, Kim (Bradford) Day and husband Larry Day of Kenduskeag, ME as well as step children Orris and Corinne Bridges of Mohannes, NB, David and Darlene of Nova Scotia, Debbie, Roy, John and Kim Bridges, all of St. Stephen, NB.

Alan was predeceased by his brother Harold Bradford of Oak Bay and daughter Tracy Bradford of Kenduskeag, Maine.

Alan loved old cars, watching his favorite sports teams, the Toronto Blue Jays and Maple Leafs, as well as playing games on the computer and spending time with his family.

The family would like to thank all the nurses and doctors at the Charlotte County Hospital, Saint John Regional Hospital, as well as, everyone at Extra Mural.

Remembrances to the charity of one's choice would be appreciated by the family. Condolences may be sent to the family online at www.mehanfuneralhome.ca