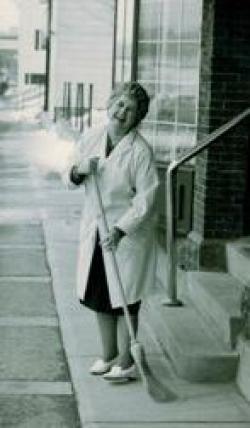 Marion Ruth (Dalrymple)Laycock, wife of the late Jack Laycock passed away March 15, 2019 at the Lincourt Manor in St. Stephen with her best friend Jackie Bateman by her side.

Born in East Gore, NS on March 16, 1933 she was the daughter of the late Aubrey & Olla (MacAskill) Dalrymple.

In addition to Ruth's parents & husband she is predeceased by her siblings Evelyn, Bert, Pauline, Audrey, Inez, baby Ethel Melissia (at birth) and Blair.

Ruth's working career began at the Kennetcook Hotel and the Dominion Stores in Nova Scotia. Ruth moved to St. Stephen in 1973 where she found her dream job with Ganongs. She retired from Ganongs in 1992 and became a regular vendor at the St. Stephen market. Ruth was an active member of the Kirk-McColl United Church and a member of the UCW.

By Ruth's request there will be no funeral service.

Cremation has taken place under the direction of The S.O. Mehan & Son Funeral Home Ltd. Burial will take place at a later date in East Gore, NS.

Memorial donations may be made to a charity of your choice. Words of comfort may be forwarded to the family at: www.mehanfuneralhome.ca