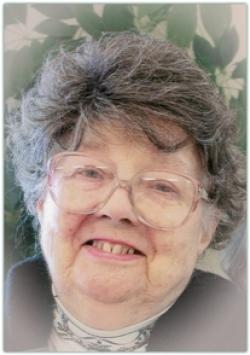 Pearl was born on February 7, 1927 in Burnaby, BC., daughter of the late Pearl (Ducloy) and Maurice Chaplin. She married Anthony Michael Kostiuk on March 4, 1948 and they resided in Chilliwack, BC.

In addition to her parents and husband, she was predeceased by her daughter, Pamela.

Shirley loved gardening, houseplants, camping, cooking, music, dancing and anything to do with animals and nature. She became a Jehovah's Witness in 1940 and spent the rest of her capable life sharing what she had learned from the Bible with others and advocating God's Kingdom. She loved this work and it brought her deep satisfaction. After the passing of her husband, she moved to New Brunswick in 2006 to be near her daughter and family. She loved the Maritimes, its people and natural beauty and particularly the autumn display of colored leaves.

Shirley became a resident of Lincourt Manor, St. Stephen, NB. in 2014, where she was well cared for with affection by the staff. They showed particular compassion in the last stages of her life and her family wish to extend their gratitude for this.