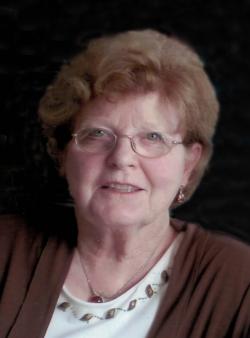 Born in St. Stephen, NB., in 1944, Brenda was the daughter of the Late Gilbert "Gib" Moffitt and Ruth (Gibson) Moffitt.

Brenda was a graduate of UNB and taught school in Alberta and New Brunswick. Brenda and Richard were married in 1967. They lived in Bathurst for nearly forty years. Brenda was a long-time member of the Gloucester Chapter IODE. She was a serious gardener and a competitive duplicate bridge player. She had a strong interest in the visual arts and was co-owner and manager of an art gallery in Bathurst for several years. Brenda was very fond of animals particularly those of the feline variety. In 2014 Brenda and Richard returned to Charlotte County. They had a home built on family property, where, as a girl, Brenda had ridden horses. Brenda is survived by her husband Richard, and by her brothers, Evan (Lynn) Moffitt of Bathurst, NB and Ralph (Eva) Moffitt of St. Stephen, NB. Family was very important to Brenda. Her brothers, her nephews and niece, her grand-nephews and grand-nieces and her cousins, all held a special place in her heart.

In keeping with Brenda's wishes there will be no funeral service or visitation held.