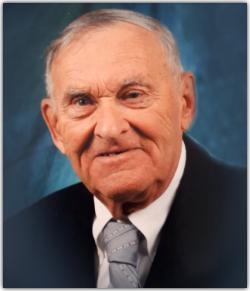 It is with great sadness and heavy hearts that the family of Duncan Webber McGeachy, announce his passing.

Duncan was age 91, and although a life long resident of St. Stephen, N.B., he and his wife Florence, moved to Fredericton, N.B. in 2017. Duncan died January 12, 2019 following a brief illness at the Dr. Everett Chalmers Hospital surrounded by his family.

He is predeceased by his parents, Dugald McGeachy and Mary (MacKlin) McGeachy, his wife Florence (Griffith) McGeachy and his son, Duncan Kirk McGeachy.

Duncan McGeachy was a lifelong coach, organizer, official, administrator and fund-raiser for school and community athletics in St. Stephen, but his impact has also been felt across New Brunswick. He attended Acadia University, McGill (1949) (BSc, Phys Ed); Mount Allison: 1964 (BEd); UNB: 1971 (MEd) and University of Maine: Orono: (C.A.S.). He taught two years in Halifax and 33 years in St. Stephen (1951-1984) with 25 of them as a principal. During his teaching career at St. Stephen High School, he coached a variety of boys and girls teams, including: basketball, track and field, cross-country and soccer. His basketball teams won more than 20 provincial championships and he coached some of the province's best track and field athletes. He chaired the committee that adopted his proposal to reorganize high school sports conferences, a prototype of the system still in place. A tireless promoter of athletes, he believed in the importance of sports for an individual and for their community. Together with his wife, Flo, they were the first husband and wife team to officiate basketball as I.A.A.B.O. members. He held various offices with the N.B. Basketball Officials and Provincial Basketball Associations. In 1967 he managed New Brunswick's first Canadian Winter Games Basketball Team in Quebec City. He was honoured with the New Brunswick Basketball Association Merit Award in 1997. Duncan was inducted into the New Brunswick Sports Hall of Fame (2011) and the St. Stephen Sports Wall of Fame (2017). Duncan also loved to watch his children, grandchildren and great grandchildren play various sports. Duncan received numerous accolades, including Queen's Medals and Merit Awards, and a St. Stephen sports and recreation facility named in his honour. His community activities include 40 years as a Kiwanian, serving as club president and in 1980 as Fundy Division Lieutenant-Governor. He was made a member of the Legion of Honor in 1992. A member of the Chamber of Commerce, he served as local president and as a provincial director. He founded the Chocolate Fest and co-chaired the group that opened the Chocolate Museum. He also served on the St. Stephen Development Board, holding the office of president for a number of years. For his extensive community involvement, he received the Queen's Silver Jubilee Medal in 1977, the Queen's Golden Jubilee medal in 2002 and the Queen's Diamond Jubilee Medal in 2013. He was the only Canadian serving as director of the Downeast Heritage Center located in Calais, ME. He was also on the Board of the St. Croix Estuary Project and was active with the Charlotte County Branch of the New Brunswick Society of Retired Teachers for many years. He also served as a director, vice-president, president and past president of the provincial organization. He served in the C.O.T.C. (Acadia), the Princess Louise Fusiliers (Res) Halifax and as an instructor and chief instructor of the #1180 St. Stephen High Cadet Corps for over 20 years. He was awarded the Centennial Medal in 1967 for his military service. Duncan McGeachy was surely one of the most active citizens and educators in the history of the province of New Brunswick.

A joint service celebrating Duncan and Florence's life will be held at the Anglican Christ Church (Parish) Church at 245 Westmorland Street in Fredericton, N.B. on Thursday, January 17, 2019 commencing at 2 pm with Archdeacon John Matheson officiating.

Family will receive condolences following the service and refreshments will be served.

A Memorial Service for Duncan and Florence will also take place in St. Stephen, N.B. in the Spring with details to be announced at a later date.

In lieu of flowers, donations may be made to the Charlotte County Cancer Society, Charlotte County SPCA, Fundy Community Foundation for the D. Kirk McGeachy Memorial Scholarship or donor's choice.

The family would also like to thank the staff, nurses and doctors at the Dr. Everett Chalmers Hospital for their compassionate care of their parents.