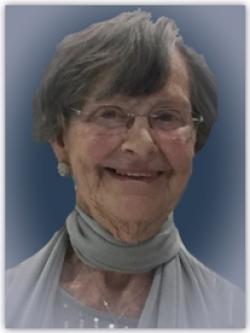 It is with great sadness and heavy hearts that the family of Florence Ilene (Griffith) McGeachy, announce her passing.

Florence was age 87, and although a lifelong resident of St. Stephen, N.B. she and her husband Duncan, moved to Fredericton, New Brunswick in 2017. Florence died unexpectedly on January 4, 2019 at the Dr. Everett Chalmers Hospital surrounded by her family.

Florence first and foremost loved her family above all else and was a strong role model for all her children, grandchildren and great grandchildren. She was known for her tailoring skills, making her family's clothing, basketball uniforms; her famous spaghetti and meatballs, carrot cake, HOMEMADE PICKLES, and her Christmas potato logs. These dishes have become family favorite recipes handed down generations. She was also involved in many sports when she was younger and in fact was the best shot for the rifle team at Vocational High School in Saint John. This was a gene she passed onto her son Lt. Col. Kirk a Lt. Col. with the 3 Field Regiment-RCA. During her life she was also an entrepreneur running a Bed and Breakfast at Oak Haven for many years. Florence was an integral part of many organizations and community events; Chocolate Fest in St. Stephen, Eastern Star, and perhaps dearest to her the Atlantic Charter Chapter IODE where she was a Past Regent and President with over 50 years of service. Church was also very important to Florence and she attended both the Kirk McColl United Church and Anglican Church in St. Stephen, N.B. Florence was also involved in sports from being a sports mom, official (referee) and spectator. She began refereeing basketball in 1955 and along with husband Duncan, they were officially recognized as the first husband and wife accredited referees in North America by the International Association of Approved Basketball Officials. Her children have many stories about her officiating their games. Although Florence began her Nurse's training prior to her marriage, it was not until 1972-73 that she returned to pursue her career and graduated from the University of Maine Orono Nursing program. She worked at Barnards Nursing Home in Calais, Maine for many years. In addition to her career as a Nurse, Florence also taught Home Economics at St. Stephen High School. In her spare time Florence enjoyed sewing, quilting, gardening, playing bridge, spending time with friends, and family and trying new activities. She was recently getting lessons from her granddaughters on how to FaceTime as she wanted to join the new electronic age.

A service celebrating her life will be held at Anglican Christ Church (Parish) Church at 245 Westmorland Street in Fredericton, N.B. on January 17, 2019 commencing at 2 p.m. Archdeacon John Matheson officiating.

A Memorial Service will also take place in St. Stephen, N.B. in the Spring with details to be announced at a later date.

In lieu of flowers, donations may be made to Charlotte County Cancer Society, Charlotte County SPCA, Fundy Community Foundation for the D. Kirk McGeachy Memorial Scholarship or donor's choice.