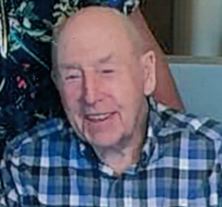 John was the son of the late Hazen and Annie (Miller) Smith and is survived by his two sons, Dale of Charlottetown, PEI and Neil (Alberta) of McAdam, NB. He is also survived by two grandchildren, Amanda and Kristal and five great grandchildren, one niece and four nephews. He also had a very special friend, Barb Hatt of St. George, NB.

John worked for the CP Railway for 39 years and was an avid volunteer for Meals on Wheels, the fire department, Manor board, Village council as well as coaching many students in various sports. He had a great knowledge of both the history of McAdam, the railway and those that worked there. He was an avid storyteller and enjoyed working at anything involving the forests.

Funeral service will be held from the Rockland Drive United Baptist Church, McAdam, NB on Monday, May 13th at 2:00 PM. The family will receive friends at the church from noon to 2:00 PM.

For those who wish, remembrances to the Rockland Drive United Baptist Church or a charity of one's choice would be appreciated by the family.