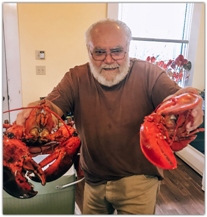 With deep sadness, the family of David George Ashley of St. Stephen announce his passing at the Charlotte County Hospital, St. Stephen, NB. on Monday, December 17, 2018.

Born in St. Stephen on June 3, 1941, he was the son of the late Frederick David and Edna Rachel (Clendinin) Ashley.

Educated in Oak Bay and St. Stephen schools, Moncton Technical Institute and the University of New Brunswick, he taught at the Campbellton Composite High School and the Oromocto Senior High School before returning to St. Stephen and becoming self-employed. Dave was a man of many talents and numerous interests, including local history and family genealogy. His happiest times were spent with family and friends at the family cottage at Oak Bay.

He was predeceased by his son, Bruce David Ashley, in 1983, and the father of his grandchildren, Timothy Lee Newman, in 2018.

In keeping with Dave's wishes, there will be no formal visitation or funeral service.

A celebration of his life will be held at a later date, with interment of ashes in the spring. In memory of Dave, contributions to a charity of the donor's choice would be appreciated by the family.