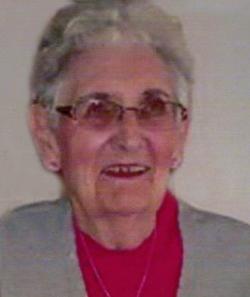 In addition to her parents and husband, Evelyn was predeceased by one sister, Gladys and two brothers, Ralph and Frederick.

After growing up in Greenock she worked for a short time in St. Stephen before marrying Eldon in 1948. Nick and Evelyn owned and operated Nixon's Variety Store on King Street in St. Stephen for a number of years. Evelyn also worked at various other jobs throughout her life. Evelyn was an excellent cook and homemaker. She was a life member of the Kirk McColl UCW K-M Unit and the Royal Canadian Legion # 9 Junior Ladies Auxiliary.

For those who wish, remembrances to Kirk McColl United Church, St. Stephen, NB or a charity of one's choice would be appreciated.'