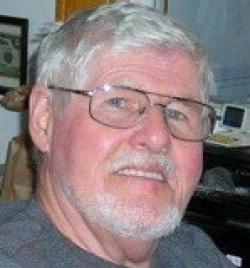 It is with heavy hearts that the family of Douglas James Goss wishes to share that this loving husband, father, brother, grandfather, uncle and friend left us on November 11th, 2018.

He is remembered by his loving wife of 51 years Elaina (Blair) Goss, son Timothy (Pam) , daughter Nicki (Perry), grand daughters Jessica and Carly and their father Andrew Hamburg. He will be missed by his brothers David (Donna) Goss, George (Christine) Goss and sister Barbara (Larry) Heans as well as brother-in-law David (Priscilla) Blair and sister-in-law Amelia Blair. There are several favorite nieces and nephews who will miss him greatly.

Douglas is predeceased by his parents Abram and Marion Goss and his sister Shirley.

As well as being a devoted and loving family man, Douglas was a dedicated educator, having taught at McAdam High School for 25 years. He was a caring, loving and patient man and he made it his life's work to help his fellow man, moulding the minds of all of his students. Douglas loved his family and was a dedicated member of his church and gave much of his time to his charity work. He was a town councillor for the Village of McAdam for several years. In this past year, Douglas' greatest joys were his two grand daughters and his great grand fur baby Mason. His pride for both Jessica and Carly brightened each and every day. He loved to tease them like only Douglas could, sharing in their laughter.

Douglas was an avid Saint John Sea Dogs fan, cheering the team to victory whenever he could. Please continue to cheer for our local Saint John Sea Dogs in memory of Douglas. Douglas lived his life to the fullest, often expressing this to others in the form of the question "where is your sense of adventure?". His lifelong adventure has come to end but his memory will live on in all of those who knew and loved him.

There will be no visitation or funeral services scheduled at this time.