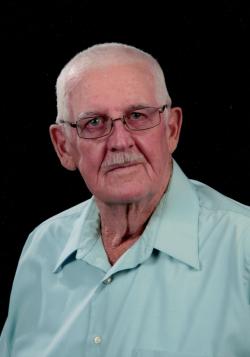 Born in Harvey, NB., son of the late Linton A. and Roxie A. (Messer) Vail.

Today we celebrate 86 years of a life well lived and filled with joys and sorrows. Arnold described himself as a 'jack of all trades and master of none', but his workmanship both on his home, property and the community tells us a different story. With the exception of a couple of years when he lived in Saint John, Arnold has lived his entire life in Brockway.

With a stint at the dry dock in Saint John in 1958 and again in 1963 his heart was still in Brockway. After graduating from school in Lawrence Station he went to work the very next day. He and a neighbour worked in the woods for 10 years cutting hardwood for the Flakeboard plant in St. Stephen.

In 1969, he began driving school bus, in the Lawrence Station area, a job he loved and held for 28 years until his retirement. He never had any trouble with the kids whatsoever. 'You had to let them know who was the boss', Arnold said, but his smile told you he had the children's safety at heart ALWAYS.

Fitting in nicely with his bus schedule over the years, was his love of carpentry. He built his own home in 1954 next door to his childhood home, having learned many of his carpentry skills from his grandfather Allan Messer, who at 80 years of age helped him build his first home.

Married in 1952, Arnold, and the love of his life, Gladys celebrated their 66th Anniversary on July 9th of this year. Childhood sweethearts, very seldom did you see one without the other. They were two peas in a pod and Gladys was there for every new adventure that came along. She believed, 'you only get out of a marriage what you put in' and it certainly worked for them.

Arnold has been involved in many organizations over his lifetime, such as Cherry Masonic Lodge for more than 50 years and the Shriners. One activity that he found most rewarding was working with the Harvey Volunteer Fire Department as Deputy Chief.

Now retired for 21 years, Arnold delighted in keeping busy with his son Mark, working in his woodworking shop, collecting one-cylinder engines, restoring his 1928 Model A Ford to tip top shape and of course spending time with the people he loved the most, his Family. Arnold has always risen to the occasion when asked to volunteer and often looked in on properties when home owners were away to make sure all was secure. A large stone beside the fire station attests to the influence of the Vail family since coming to the area in 1818. Arnold's motto was 'before I get out of the bed in the morning I decide what the day will bring, and I try to accomplish something good everyday'.

For those who wish, remembrances to the NB Lung Association or a charity of one's choice would be appreciated. Condolences may be sent to the family online at www.mehanfuneralhome.ca

The family wishes to extend their heartfelt thanks for the support of 'Arnold's Angels', homecare workers, Paula and Jessie Grant, as well as the nurses and staff of Extra Mural.