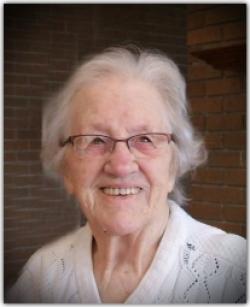 The death of Inez Whittier occurred on Thursday, October 11, 2018 at Passamaquoddy Lodge, St. Andrews, NB. at the age of 97.

She was born in Blacks Harbour, NB. to Roland and Grace (Leavitt) Bradford on March 5, 1921.

In addition to her parents, she was predeceased by her husband Horace, son, Vance (Marlene), brother, Roland, son in law, Eric Johnson, grandson Jason and several in laws.

A graveside service will be held at the Rolling Dam Baptist Cemetery, Rolling Dam, NB. on Monday, October 15, 2018 at 2 PM.

There will be no visitation. For those who wish, in lieu of flowers, remembrances to the Charlotte County Cancer Society or a charity of one's choice would be appreciated.