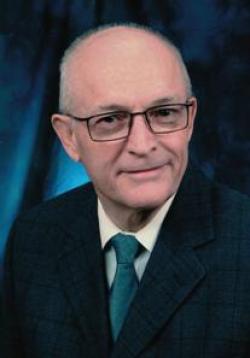 It is with great sadness that the family of Foster Cyril Harding, age 82, announces his death. He passed peacefully into the hands of the Lord on Thursday, August 2, 2018 while in palliative care at the Charlotte County Hospital.

Foster was born on April 8,1936 in Yarmouth County Nova Scotia, son of the late Ervan Russel and Vida Eliza (Hamilton) Harding. He spent the first 11 years of his life in the Yarmouth area spending much of his free time with his grandparents Murray and Sadi on their farm working with his grandfathers Clydesdale horse ""Laddy"". After the war there was a construction boom in the St. Stephen area, so along with his brother Milton, the family moved from Yarmouth to St. Stephen in 1947. Foster took up painting in high school which later turned to pencil and colored pencil sketches. Over the years he produced drawings for his children and grandchildren which they will cherish for the rest of their lives. Foster had many jobs throughout high school and upon graduation travelled to Edmonton and at various times to Ontario for work, but always returning to St. Stephen, to his love of hunting and fishing and the outdoor life that the community offered. He took a job at the newly opened Ford dealership run by Les Fraser which later became Connelly Motors. It was during these years that he met and married his wife Carrie(Teri). In 1972 they opened and operated the Shoe Horn shoe store and as he says ""started the best years of their life"". Foster loved golf, and both played and followed some key players such as his favorite Tiger Woods throughout his career starting back in 1996. He was an avid Blue Jays fan and spent time following them. Foster was a deeply religious man and spent many happy hours reading his Bible. He said he was glad he got to ""know the Lord"" during his life. He served as a Deacon of the church and with Teri participated in vacation Bible school in the summer and hosted adult Bible study for many years at their house.

Foster's memorial service will be held at 2 PM on August 7, 2018 at the Union Street United Baptist Church, Union Street, St. Stephen, NB. This will be followed immediately by a reception held in the church hall.

In lieu of flowers, donations can be made to the Union Street Baptist Church Building Fund.

Foster's family wishes to thank the nursing staff on floor 1, Palliative Care of the Charlotte County Hospital for their compassionate care during the last few months.