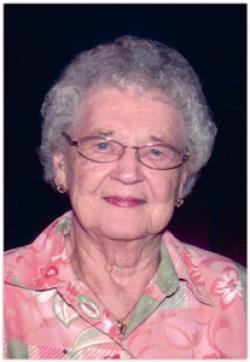 On Saturday, July 28, 2018 Verna (Mills) Cole passed away at the Robbinston Bridge Home, Robbinston, ME. surrounded by loving family members.

Born on June 9, 1921, Verna was the daughter of the late Byron and Ina (Getchell) Marshall.

She was predeceased by one son, Wayne (Ruth), three sisters: Madeline, Alma and Doris, two brothers: Leo (Betty) and Gilbert.

Verna married Frank Mills of St. Stephen in 1942. They enjoyed a loving marriage until his untimely death in 1967. In 1973, she married Donnie Cole of Calais, Maine, who, sadly, passed away only four years later in 1977. Several years later, she met Gilbert Hanson of Machias, Maine, they formed a loving partnership and enjoyed going to local dance halls, listening to music and traveling throughout the US and Caribbean. One only has to look at the early photos of Verna on a motorcycle, standing in front of a Jimmy Carter campaign office or sitting with puppies on her lap to know she was a woman of strength and character. Verna had a strong-minded and kind-hearted personality, traits that she instilled in her children.

For those who wish, remembrances to the Cancer Society, Diabetes Association or a charity of one's choice would be appreciated.

Verna's family wishes to thank the staff at the Calais Alternative Care Home, Union Village and the Robbinston Bridge Home for their kindness and care.