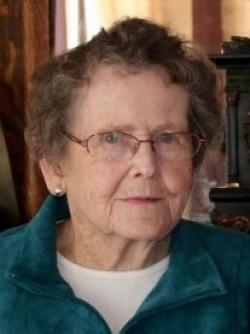 It is with heavy hearts the family of Helen Gould Davidson (Leonard), announces her passing which occurred at Lincourt Manor, St. Stephen, NB on Monday, July 16, 2018.

Helen was the wife of the late John A. Davidson. She was born in Saint John, NB, and was the daughter of the late Charles and Margaret Leonard.

In addition to her parents and husband, Helen was predeceased by her sister, Marion (Merme) Doig.

Helen was actively involved in IODE and was a member of the St Stephen Presbyterian Church. She loved travelling with her sister Barb and spending time with her grandchildren.

Family will receive friends at the funeral home starting at 6 PM.

In lieu of flowers, remembrances to a charity of one's choice would be appreciated. Condolences may be sent to the family at www.mehanfuneralhome.ca