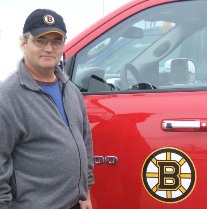 The family of Eugene Frederick Anderson is saddened to announce his passing at home on Tuesday, June 19, 2018.

Born on September 27, 1959 in Woodstock, NB., son of Iris (Crichton) Anderson and the late Dellis Anderson.

Pre-deceased by his father, Dellis and infant brother, Quintin.

Family will receive visitors at the funeral home on Thursday from 12-2 PM.