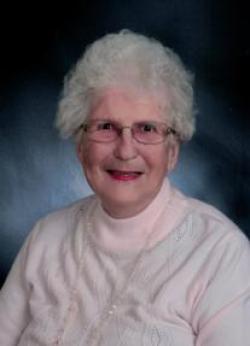 It is with great sadness the family of Marion Louise (Carey) Vanstone announce her death at the Charlotte County Hospital on June 14, 2018, at the age of 92.

She was valedictorian of the 1943 McAdam High School graduation class. In 1944 she graduated from Normal School in Fredericton with Highest Professional Standing in her class. She taught in Beaver Harbour, Campobello Island and finally St. Stephen in 1945 teaching English. It was in St. Stephen where she met Harry Vanstone. Marion and Harry were married by Father Ward in McAdam in 1950 at St. Clement's Roman Catholic Church. Six children were born from 1953 and Marion became a stay at home mom. David Joseph, first born in 1953, died that same year. David was followed by Mary Patricia Vanstone (John Roby), Carolyn Joan McNamara (Bryan), Monica Claire Lyons (Wade), Janice Elizabeth Rice (Kirk) and Harry Peter Vanstone. Marion returned to teaching when Peter was in high school. While teaching she became interested in working towards her Bachelor of Education and was encouraged to do so by Harry, graduating at 58 from the University of New Brunswick in 1984. She and Harry both retired in 1989 and started their world travels. Marion and Harry enjoyed many trips and cruises, exploring Europe, China, Africa, Russia, Central and South America, as well as many points in North America.

Through the years Marion kept busy as a member and President of Holy Rosary CWL, member and president of the Atlantic Chapter of I. O. D. E., Board of School Trustees, and Board of Home Support. Marion enjoyed watching and supporting her children through the years and loved to see her family grow. Her grandchildren David, Charlie, Mike, Rachel, Ed, Mark, Pat, Ethan and Oliver all have such fond memories of their Gram. Marion also leaves behind one great grandchild, Aria. Marion is also survived by her special cousin, Roberta Paquin, Rhode Island. Marion and Roberta spent many summers together in McAdam and Rhode Island as young ladies.

Marion is predeceased by her parents, Frank and Emily (Cote), sisters Florence and Evelyn, brother Francis, and infant son David.

The family wishes to thank Dr. Pinder, the staff of Charlotte County Hospital Floor 1, the Extramural nurses and Home Support Service ""girls"" for their care and kindness. As well, we appreciate the support of our many neighbors and friends.

Funeral Mass will be celebrated at the Holy Rosary Catholic Church, Union St., St. Stephen, NB on Saturday, June 16, 2018 at 11 AM.

For those who wish, remembrances to the St. Stephen Food Bank, Home Support or a charity of one's choice would be appreciated.