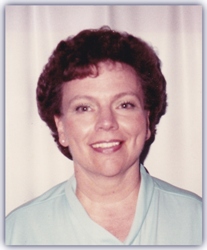 In 1974, Bev moved to New Brunswick with her second husband and three children to farm, but due to an allergic reaction to black fly bites, Bev was unable to garden. After moving here, they welcomed their fourth child. In 1977, Bev & Pete started Bayside Stevedoring Ltd in Bayside. Soon after, Bev started her ship agency company, Bev Frye Shipping. In 1990, they partnered with a Dutch company to build a cold storage facility. Their efforts kick started activity at the Port of Bayside.

There will be no funeral service or visitation at this time.

For those who wish, remembrances to the Heart and Stroke Foundation or a charity of one's choice would be appreciated.

The family wishes to thank all her care givers over the years. She grew very close to many of you.

This is not good-bye, we'll see you later.