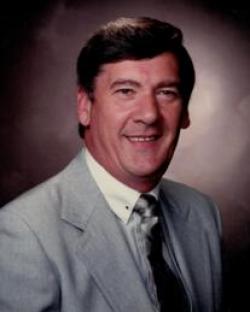 Stephen Braysford passed away peacefully at the Charlotte County Hospital in St. Stephen N.B. on the 29th of May 2018.

Born January 14, 1939 at the Chipman Memorial Hospital in St. Stephen, he was the son of Peter and Elsie Braysford and adored husband of Rowena Braysford (Lyons) of St. Stephen, N.B.

Stephen grew up in Milltown N.B. where he was briefly employed as a Police Officer after which he began working at the Save Easy in St. Andrews prior to managing the store in St. Stephen. In 1981, he and Rowena moved to Doaktown, New Brunswick where he was franchise owner of the Save Easy for twenty years prior to moving back to St. Stephen. After thirteen years of retirement, he served as manager of the Granville Park Place in St. Stephen. He was the founding president of the Old Mill Pond Golf and Country Club in Doaktown, as well as, former President and long-time member of the St. Stephen Chapter of the Kiwanis Club. He was also a member of the Christ Anglican Church in St. Stephen. He enjoyed being in the outdoors, gardening, hunting and fishing and spending time with friends and family.

He is pre-deceased by his parents, his sister, Sally Davis and brothers- in-law, Warren Davis and Allen Lyons, nephew, Jonnie and son, Brent.

A graveside funeral service will be held at 11:00 AM on Friday, June 1st, 2018 at the St. Stephen Rural Cemetery on Hayman Avenue followed by a reception at Christ Church Anglican Church in St. Stephen.

For those who wish, charitable contributions may be made to the Canadian Cancer Society or charity of one's choice.

On line condolences or donations can be made at www.mehanfuneralhome.ca