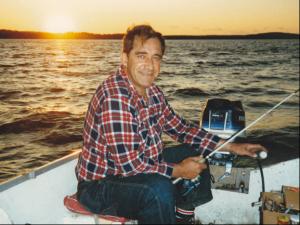 Ralph Hamilton Annis passed away at Wauklehegan Manor, McAdam, NB. on Monday, May 14, 2018.

Born in McAdam, NB., he was the son of the late Harry Stanley and Esther (Moore) Annis.

Ralph joined the Royal Canadian Air Force when he was 17 years old and after serving as a radar technician, remustered and became a pilot, flying Vampires, Sabres, Harvards, T 33s, CF-104s and Tutors. Some said he was the best single seat pilot the Air Force ever had. He flew with the Golden Hawks aerobatic team for the first two of their five years of air shows across Canada as the Lead Solo pilot. As a member of the Overseas Ferry Unit, he set a cross-Canada speed record in an F86 Sabre flying from Vancouver to Halifax in five hours and thirty seconds, breaking the previous record by an hour and twenty minutes. His military career took him to England, Germany (several times), Quebec, Alberta, Ontario, Saskatchewan, where he was Base Commander of CFB Moose Jaw, Egypt, where he was Deputy Commander of UNEF II and Colorado Springs, where he was Deputy Commander, Cheyenne Mountain. He also spent a year attending the National Defence College in Kingston, Ontario.

At the age of 48 he retired from the Air Force, and settled back into his hometown, McAdam, where he was close to his beloved camp on Palfrey Lake.Many years of fishing, hunting, maple sugaring, swimming, four-wheeling and sledding followed.

Seven grandchildren and six great-grandchildren have learned to love the outdoors in the woods around Palfrey Lake. But Ralph was not the type to lead a quiet life. He took a job flying the TBM Avenger to spray forests ("bombing budworms" he called it), then became Mayor of McAdam, started a motel, ran for the NB Legislature (as a Liberal, the year every single seat was taken by the Tories), served as Dominion Vice President of the Royal Canadian Legion, and was appointed as a Member of the Veterans' Pensions Appeal Board, moving to Charlottetown, PEI for a few years where he again travelled across Canada holding assessment hearings.

He was supported throughout all this by his devoted wife, Margaret, the mother of his five children, Gayle (Guy), of Vancouver, Stuart (Debbie) of Moose Jaw, Saskatchewan, Diane (Don) of Phoenix, Arizona, Robin, and her twin brother Robert.

He was predeceased by Robert (1958), Robin (2007), and Margaret (2014). He lived bravely on without Marg, never complaining as his strong mind and body began to falter. Ralph moved into Wauklehegan Manor in January 2017 after a series of falls. It was a true comfort to him to be back in his hometown of McAdam, and the family is grateful to all those who aided and assisted him in this last chapter.

Interment at Rockland Cemetery with a reception to follow at the Royal Canadian Legion Branch 7, 9 Lake Avenue, McAdam.

No flowers or charitable donations, please, but condolences may be sent to the family online at www.mehanfuneralhome.ca