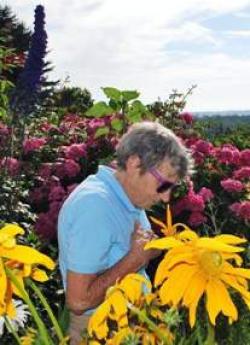 Janetta Callander Buchanan passed away at Peace Arch Hospice in White Rock, BC on Sunday May 6, 2018 at the age of 92.

Though her last few years were challenging, she greeted each day with courage and determination. So many loved her. Netta was born in Troon, Ayrshire, Scotland on July 17, 1925 to parents Sandy and Kate Wilson. She had one older brother, Roddy, and five older sisters, Cena, Mina, Mary, Kathie, and Jessie. They have all predeceased her. Her only living sibling is a younger sister, Lily Edgar, who lives in Oakville, Ontario with her family.

In Scotland, Netta's family farm was called the Marress. From a very early age, Netta worked long hours in the dairy barn, hand-milking and cleaning. It was on the farm in 1944 that she met her lifelong love, Norman Buchanan, a handsome soldier with the Canadian Artillary from St. Stephen, New Brunswick. They married in March 1944, just a few months before Norman took part in the Normandy Invasion.

In July 1945 their first child, Janice, was born in Scotland. Norman returned to his family home in New Brunswick. Netta boarded the Queen Mary with two suitcases, a new baby and hope for a happy life ahead. The couple lived for a few years with Norman's parents in St. Stephen, before settling into the family home at 10 George Street. It was in this tiny abode that 4 more children were born, Pamela in 1947, the twins Gale and John in 1950, and Bruce in 1952. Together, Netta and Norman lived in that home until Norman passed away at the age of 93, in 2008. For 64 years, Netta cared for her family and friends, supporting Norman's career as a politician and businessman, and busily tending her brood and her garden. She loved to cook and share meals together. She was a generous volunteer, involved in community activities such as curling and quilting, IODE, Brownies and all things Presbyterian. Her grandchildren have memories of their days at 10 George and the cottage, and Nana's loving ways of making each of them feel special. In 2009 she visited her son Bruce on his farm in Langley, BC. Enjoying the weather and the company, she moved from St. Stephen to the farm, soon establishing herself again as a great cook and gardener. Her feisty spirit, love of laughter, and stellar values assured Netta of constant company.

In her last 3 years, Netta enjoyed her many friends and activities at Whitecliff Seniors Residence in White Rock, BC.

Netta is predeceased by her parents, six siblings, her husband Norman, her son John in 1994, and her daughter Pamela Lawson in 2007.

Family will receive friends at the funeral home starting at 1:15 until service time.

For those who wish remembrances to the Atlantic Charter Chapter IODE, Charlotte County SPCA or a charity of one's choice would be appreciated.