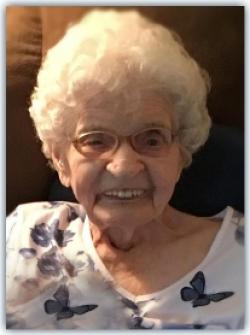 Margaret Evelyn Knorr, wife of the late Robert Knorr (2013), passed away on May 12, 2018 at Villa Acadienne, Meteghan, Nova Scotia.

Mom, having lost her mother at age of 6, spent the first years of her life living with her father and 2 younger sisters on a farm in Neville, Saskatchewan during the 20's and 30's. She then moved to Ottawa, Ontario to live with her Grandmother Marjerrison and Aunts Florence and Eva, where she also attended Business College. In her secretarial positions, she worked for DND, Ottawa ON and Simpson Sears, Toronto ON. While in Toronto, her friend Gladys suggested she write to her cousin Bob (a soldier stationed overseas), which led to a romantic marital bliss of 66 years. In 1951, Mom and Dad, and their family settled in St. Andrews, NB.

Mom was a Past Worthy Matron, Algonquin Branch of Order of the Eastern Star; Past President of the Ladies Auxiliary, Royal Canadian Legion Passamaquoddy Branch #8; Life Member of the Anglican Church Women's Auxiliary; Sunday school teacher, All Saint Anglican Church; and member (curler), St. Andrews Heather Curling Club. Mom also enjoyed cooking, knitting, puzzles, reading, gardening, curling, watching Wheel of Fortune and Jeopardy and spending time with her family. Her favourite hockey team was the Toronto Maple Leafs. Mom and Dad made frequent visits to Ottawa ON during the 50s and 60s. They also travelled to Scotland and throughout Canada (BC, NB, NS, ON and SK) but were always the happiest on Thomas Avenue gardening and chatting with their neighbours.

There will be no visitation.

The funeral service will be held at All Saints Church, St. Andrews N.B. with Archdeacon John A. Matheson officiating, on Saturday, May 26th, at 11:00 a.m. with a reception to follow at the Church Hall.

The interment will take place in Anglican Chapel of Ease Cemetery, Chamcook following the reception.

In lieu of flowers, memorials may be made to All Saints Church, St. Andrews, or the charity of one's choice.