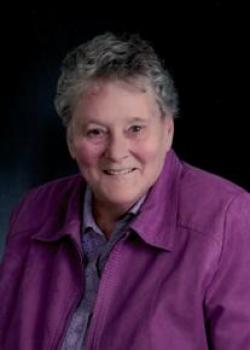 Jean was a pillar of the St. Stephen's Catholic Church in Milltown for many years. She and Wilfred enriched the community through their lifetime of volunteer work. They spent countless hours preparing the famous "Jean Comeau Roast Beef Dinner for the church, as well as many service groups and various youth fundraisers. She was a lifetime member of the Girl Guides of Canada, past member of the CWL and a member of the St Stephen Legion Branch #9. On April 9, 2018, Jean received a lifetime membership from the St Stephen Legion, her final accomplishment.

Jean was predeceased by her husband Wilfred in 2012, as well as, one sister and three brothers.

Mass of Christian Burial will be celebrated at St. Stephen's Roman Catholic Church, Milltown Blvd., St. Stephen, NB. on Monday, April 16, 2018 at 11 AM.

For those who wish, remembrances to St. Stephen's Roman Catholic Church Building Fund, Charlotte County Cancer or a charity of one's choice would be appreciated.

The family wishes to thank the Nurses and Staff of the Charlotte County Hospital, Dr. Norman Lister and Extra Mural for the care provided to Jean.