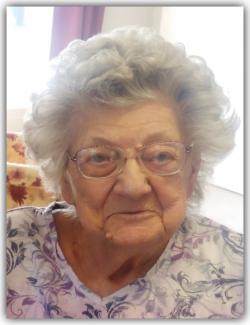 The Wilson family is sad to announce the peaceful passing of Pearl Wilson, of McAdam NB, at the Passamaquoddy Lodge, St. Andrews, NB on March 28, 2018.

She was predeceased by her husband Herb, daughter Ivy May and her brother -in-law Arleigh.

The family would like to express their sincere appreciation to all the staff of Passamaquoddy Lodge, St. Andrews, NB for their kindness and care.

As per her wishes, there will be no visitation or funeral service.

A private interment service will be held at a later date.

For those who wish, in lieu of flowers, donations can be made to Passamaquoddy Lodge or a charity of the donors choice.