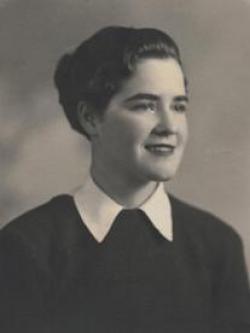 Born in Leverville, N.B. on November 2, 1917, she was the daughter of the late Thomas and Mabel (McGuire) Giddens.

Helen was a member of the quilting club, Holy Rosary Catholic Church, oldest member of the Catholic Women`s League in St. Stephen and many, many other groups. She loved to knit, crochet and quilt, always having baby quilts on hand for new arrivals. During her thirty-two and a half years of teaching, she taught at Leverville School, Dickie District School, Upper Tower Hill School, Rolling Dam School, Bay Road School, Dumbarton School and retired from the Lawrence Station School.

She passed as she had lived, with strength and dignity. She will be greatly missed by the countless lives she touched over the many years.

Mass of Christian Burial will be celebrated from the Holy Rosary Roman Catholic Church, Union St., St. Stephen on Monday, March 19, 2018 at 11 am.

For those who wish, in lieu of flowers, remembrances to St. Patrick`s Roman Catholic Cemetery, Rolling Dam, N.B. or a charity of one`s choice would be appreciated by the family.

On line condolences may be sent to the family at www.mehanfuneralhome.ca