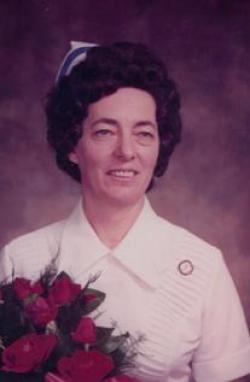 She was a long-time resident of Weston, and nursed at Carleton Memorial Hospital in Woodstock until her retirement. In recent years she had made her home in St Andrews.

Hattie was predeceased by her husband Eugene, son Conrad and infant grandson Joseph, and her sister Louaina and her brothers, Fred and Alex.

Hattie had the"gift of gab" and enjoyed chatting with everyone she met. A lifelong animal lover, she always had many animal friends, including cats, dogs, horses, chickens, and all wild animals as well. She leaves behind her most recent canine companion, Spot.

Interment in New Denmark will follow at a later date.

The family would like to thank the staff of Passamaquoddy Lodge for their compassionate care.

For those who wish, remembrances to the SPCA or a charity of one's choice would be appreciated.

Condolences may be sent to the family online at www.mehanfuneralhome